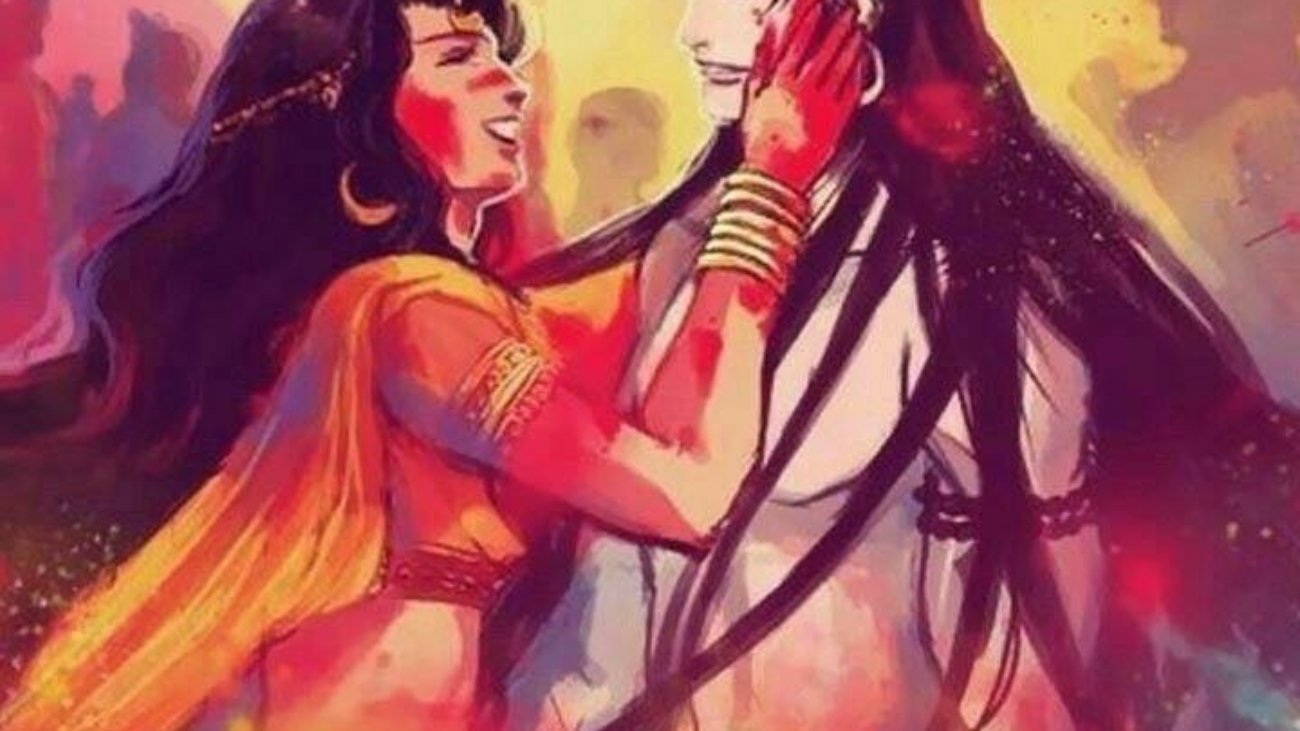 Holi ( होली ) is a Hindu spring festival in India and Nepal, also known as the “festival of colours” or the “festival of love”. The festival signifies the victory of good over evil, the arrival of spring, end of winter, and for many a festive day to meet others, play and laugh, forget and forgive, and repair broken relationships, and is also celebrated as a thanksgiving for a good harvest. It lasts for two days starting on the Purnima (Full Moon day) falling in the Bikram Sambat Hindu Calendar month of Falgun, which falls somewhere between the end of February and the middle of March in the Gregorian calendar. The first day is known as Holika Dahan (हॊलिका दहन) or Chhoti Holi and the second as Rangwali Holi, Dhuleti, Dhulandi or Dhulivandan

Relation of Holi to Bhagwan Vishnu – There is a symbolic legend to explain why Holi is celebrated as a festival of colours in the honor of Hindu god Vishnu and his follower Prahlada. King Hiranyakashipu, according to a legend found in chapter 7 of Bhagavata Purana, was the king of demonic Asuras, and had earned a boon that gave him five special powers: he could be killed by neither a human being nor an animal, neither indoors nor outdoors, neither at day nor at night, neither by astra (projectile weapons) nor by any shastra (handheld weapons), and neither on land nor in water or air. Hiranyakashipu grew arrogant, thought he was God, and demanded that everyone worship only him.

Hiranyakashipu’s own son, Prahlada, however, disagreed. He was and remained devoted to Vishnu. This infuriated Hiranyakashipu. He subjected Prahlada to cruel punishments, none of which affected the boy or his resolve to do what he thought was right. Finally, Holika, Prahlada’s evil aunt, tricked him into sitting on a pyre with her. Holika was wearing a cloak that made her immune to injury from fire, while Prahlada was not. As the fire roared, the cloak flew from Holika and encased Prahlada, who survived while Holika burned. Vishnu, the god who appears as an avatar to restore Dharma in Hindu beliefs, took the form of Narasimha – half human and half lion, at dusk (when it was neither day nor night), took Hiranyakashyapu at a doorstep (which was neither indoors nor outdoors), placed him on his lap (which was neither land, water nor air), and then eviscerated and killed the king with his lion claws (which were neither a handheld weapon nor a launched weapon).

The Holika bonfire and Holi signifies the celebration of the symbolic victory of good over evil, of Prahlada over Hiranyakashipu, and of the fire that burned Holika.

Relation of holi to Bhagwan Krishna – In the Braj region of India, where the Hindu deity Krishna grew up, the festival is celebrated until Rangpanchmi in commemoration of the divine love of Radha for Krishna. The festivities officially usher in spring, with Holi celebrated as a festival of love.There is a symbolic myth behind commemorating Krishna as well. As a baby, Krishna developed his characteristic dark blue skin colour because the she-demon Putana poisoned him with her breast milk. In his youth, Krishna despaired whether the fair-skinned Radha and other girls would like him because of his skin colour. His mother, tired of the desperation, asks him to approach Radha and colour her face in any colour he wanted. This he does, and Radha and Krishna became a couple. Ever since, the playful colouring of Radha’s face has been commemorated as Holi.

Relation of Holi To Bhagwan Shivji – Among other Hindu traditions such as Shaivism and Shaktism, the legendary significance of Holi is linked to Shiva in yoga and deep meditation, goddess Parvati wanting to bring back Shiva into the world, seeks help from the Hindu god of love called Kama on Vasant Panchami. The love god shoots arrows at Shiva, the yogi opens his third eye and burns Kama to ashes. This upsets both Kama’s wife Rati (Kamadevi) and his own wife Parvati. Rati performs her own meditative asceticism for forty days, upon which Shiva understands, forgives out of compassion and restores the god of love. This return of the god of love, is celebrated on the 40th day after Vasant Panchami festival as Holi. The Kama legend and its significance to Holi has many variant forms, particularly in South India.