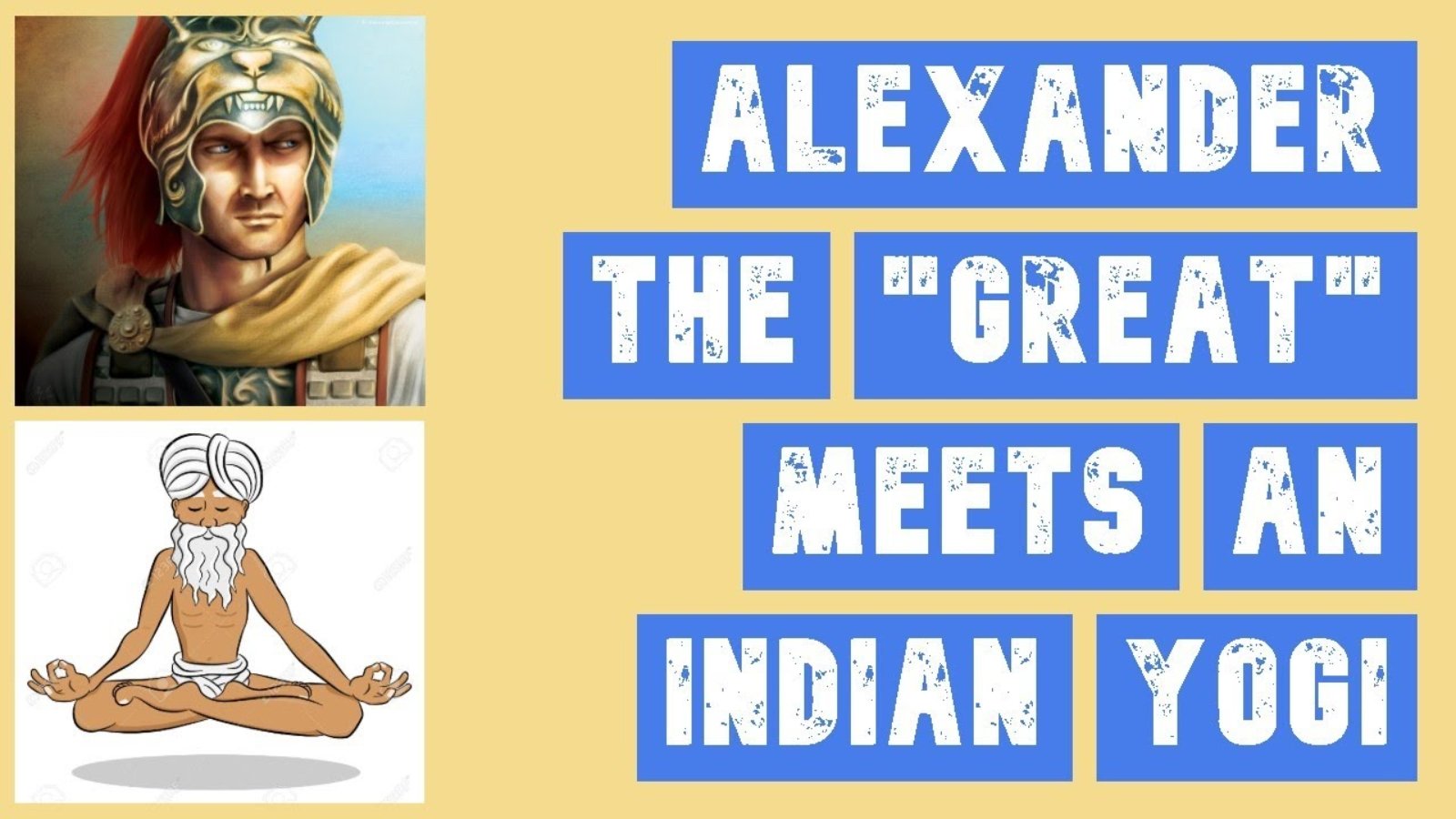 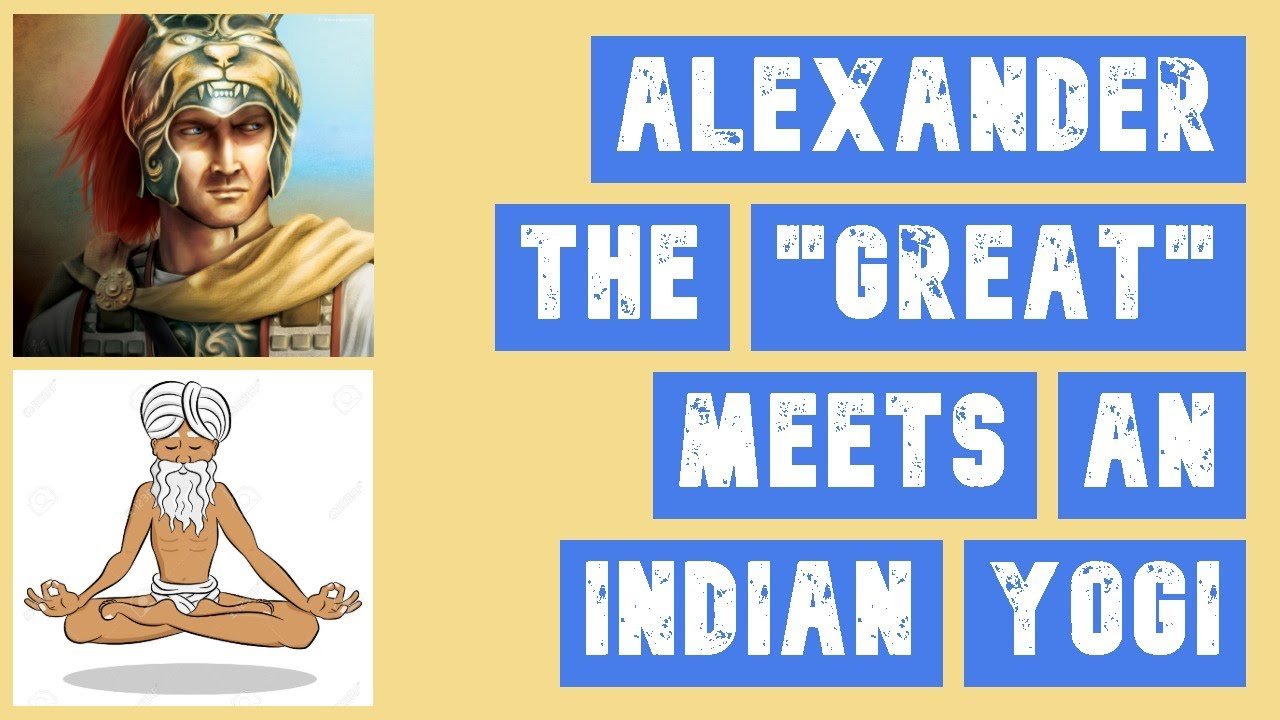 Alexander was a brilliant warrior and military genius. He had a bright and subtle mind. His tutor was the great Greek philosopher Aristotle, whose thoughts and writings have had a huge influence on western thoughts concerning ethics, beauty, and politics.

Alexander created a huge army and invaded Persia, of which he conquered along with Egypt, Phoenicia, Palestine, Babylonia, Assyria, and Asia Minor. Alexander now commanded a vast empire but was not satisfied so went on to invade India. When he was making his way through India he came to the Indus Valley.  Whilst there, he encountered a small group of yogi’s who were sitting in meditation on the banks of the river.

EPISODE 1
Alexander’s party of soldiers was trying to get through but the meditating yogis were blocking their way and were refusing to move.  One of Alexander’s Lieutenants started shouting at one of the yogi’s, “This man has conquered the world! What have you accomplished?”  The yogi looked up calmly and replied, “I have conquered the desire to conquer the world” and upon hearing these words Alexander laughed; he admired the wisdom of the yogi. 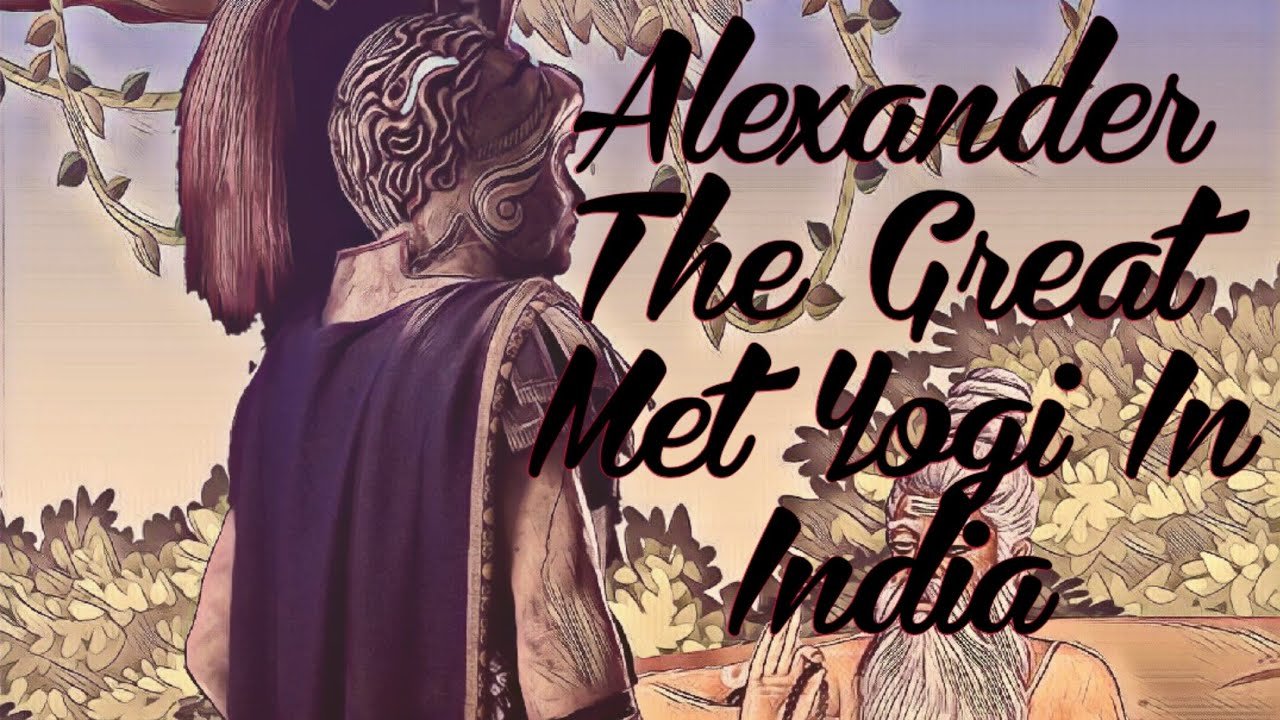 EPISODE 2
Plutarch further speaks of the wit and character of Indian Yogis in these terms:

“Alexander summoned ten of the wise men of the country, which men do all go naked, and are called philosophers of India. They had made the tribe of Sabbas to rebel and fight against Alexander and had thereby greatly hurt him. These philosophers were taken to be the sharpest and readiest of answer Alexander put them, as he thought many hard questions. He told them that he would put the first man to death that answer his question worst and likewise all others in this order. He made the eldest among them the judge of their answers.

“The question that he asked the first man was:

“Whether the dead or the living, were the greater number”. He answered, “the living…’For, the dead are no more man.’”

‘He asked the second man, “Whether the earth or the sea brought forth most creatures”.

‘The man answered, “The earth ‘for the sea is but a part of the earth.”

‘To the third man he asked, “Which of all beasts was the subtlest”.

‘The answered given was, “That which man hitherto never knew”.

‘To the fourth, question put was, “why did you make king of Sabbas rebel against him (Alexander)?”

‘The answered received was, “Because he should live honorably, or die vilely”.

‘To the fifth he asked, “Which you thought was the first- the day or the night?”

‘Coming to the sixth he asked, “How a man should come to be beloved?”

‘He got this answer, “If he be a good man and not terrible”.

‘To the seventh he put the question, “how a man should be a god?”

“In doing a thing that is impossible for a man”, was the received answer.

“Which was stronger, life or death?” was the question put by him to the eighth.

‘And he received this answer, “life that suffers so many troubles.”

‘To the last ninth Yogi, he put this question, “How long a man should live?”

‘The answer was, “until the man thinks it better to die, than to live.”

‘After hearing these answers, Alexander turned to the tenth yogi and asked him to give his judgment upon them.

‘The judge said, “They had all answered one worse than another.”

‘Thereupon, Alexander said, “then you shall be made to die first, because you have given such a judgment.”

‘He replied promptly to Alexander, “It cannot be so, 0 king, unless you be a liar, because you said that you would kill him first, that answered the worst.”

‘Alexander gave them rewards and allowed them to go.”

EPISODE 3
“When Alexander the Great was busy conquering the world far and wide, he came at last to India.

When he was about to return to his country, he remembered that his
people had asked him to bring to them an Indian yogi. They had heard
a lot about yogis and were very desirous of seeing one, meeting him,
hearing him speak and receiving his blessings. Alexander was told
that the yogis dwelt in the forest.

In quest of a yogi he went to a forest. Sure enough, he found one
sitting underneath a tree, in deep meditation. He waited patiently
until the yogi opened his eyes. They shone with a strange, mystic
light.

Reverently, Alexander requested the yogi to accompany him to Greece,
saying.

“I will give you everything you need or ask for. But, pray, do come
with me. My people would love to meet you!”

The yogi quietly answered, “I need nothing, I am happy where I am.”

This was the first time that anyone had turned down Alexander’s
request. He could not control himself. He flew into a rage.

And unsheathing his sword, he thundered, “Do you know who is
speaking to you? I am the great king Alexander. If you will not listen to me. I shall
kill you- cut you into pieces!”

Unperturbed, the yogi answered. “You cannot kill me. You can only
kill my body. And the body is but a garment I have worn. I am not
the body. I am that which dwells within the body.”

The yogi continued, “You say you are a king. May I tell you, who you
are? You are a slave of my slave!”

Stunned. Alexander asked. “How am I a slave of your slave?”

In a voice tender with compassion, the yogi explained. “I have
mastered anger. Anger is my slave. See, how easily you gave way to anger. You are a slave of anger, and, therefore, a slave of my slave!” 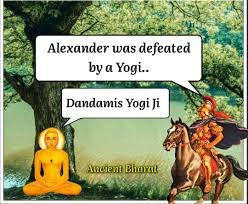 EPISODE 4 (even though technically this is episode 3, I switched the order, wanted to save the best for the last)
Aristotle the teacher and guide of Alexander had told him that, in India lived great mystical, intellectual, and spiritual super beings called Yogis. He told Alexander if he ever got the opportunity, to go and meet a Yogi SPECIFICALLY DANDAMIS, and if possible to even bring one back to Greece for Aristotle to meet.

Upon inquiry, whilst in India, Alexander learned about the great and wise Sanyasi, Yogi Dandamis, of Taxila who dwelled deep in a forest.

Alexander sent numerous summons to Dandamis, which he promptly ignored. Alexander who could strike fear in the hearts and minds of great armies and kings was intrigued. He became desperate to meet this being who assigned no importance to Alexander.

Alexander next sent messengers with lavish gifts and an invitation to Dandamis for discourse and discussion on philosophy. Dandamis politely declined both the gifts and the invitation.

Though angry Alexander, a pupil of the great philosopher and teacher Aristotle, knew very well that, great beings could rarely be lured or coerced.

Finally, Alexander sent a messenger, his helmsman, Onesicritus a disciple of the Hellenic school of Diogenes to invite Dandamis. When Onesicritus met Dandamis, he lavished praise and gifts on him. When Dandamis declined his invitation and gifts, Onesicritus threatened Dandamis. He said that Alexander had ordered the beheading of Dandamis should the orders of the emperor be disobeyed.

Dandamis remained unperturbed, stating, he had no fear of death. Onesicritus couldn’t muster the courage to kill Dandamis, and, instead, paid his respects to Dandamis and went back to report the incident to Alexander.

Livid at being rejected by a naked forest-dweller, Alexander decided to go to Dandamis himself. With his Marshal and a large entourage, Alexander made his way deep into the forest. Even though he experienced the powerful aura of Dandamis, Alexander grew furious when the sage did not get up to welcome him.

“How dared you refuse my gifts?” Alexander demanded.
“They were smeared in blood,” replied Dandamis.

The chilling truth, and fearless conviction in Dandamis’s voice, rattled Alexander. Alexander could not let his men overhear the embarrassing exchange, so he ordered them to move some distance away.

Then, when he was alone with Dandamis, Alexander dismounted from his horse, walked towards the sitting sage, and menacingly stood over him.

“Do you know who I am?” Alexander roared.
“I don’t think even you know, who you are,” replied Dandamis.

Alexander felt deeply insulted. He drew his sword and swung it at Dandamis, stopping just before it struck Dandamis’s neck.

“I am Alexander, the world conqueror,” he shouted.
“You are sitting on my land. Submit or I’ll kill you … ”

“Your land?” Dandamis chuckled as he cut him off. “The land belongs to no one, O King!”

All creation belongs to the Creator alone, Alexander. And no one has any right to destroy what they haven’t created. You have blood on your hands, O Emperor! You may have a temporary claim on the land, but you have permanent scars on your soul.”

Clearing his throat, a flustered and uncomfortable Alexander lowered his sword and adjusted his posture.

“The whole world is mine, Dandamis,” Alexander exclaimed. “History will remember me as the mightiest king! My men will die for me!”

“What good is your ambition or their remembrance, O King? You drown yourself in alcohol every evening so you may forget about your crimes and sins. These men who surround you, they are tired of you. You will see it, they’ll give up on you one day, in fact very soon.”

“Besides,” Dandamis continued, “what will you do with the world? All you need is two yards. Two yards long and two yards deep. Ultimately that’s all that will belong to you.”

Alexander sheathed his sword and sat at the feet of Dandamis for a long while. After a rather long discourse, a humbled Alexander bowed his head before Dandamis and left.