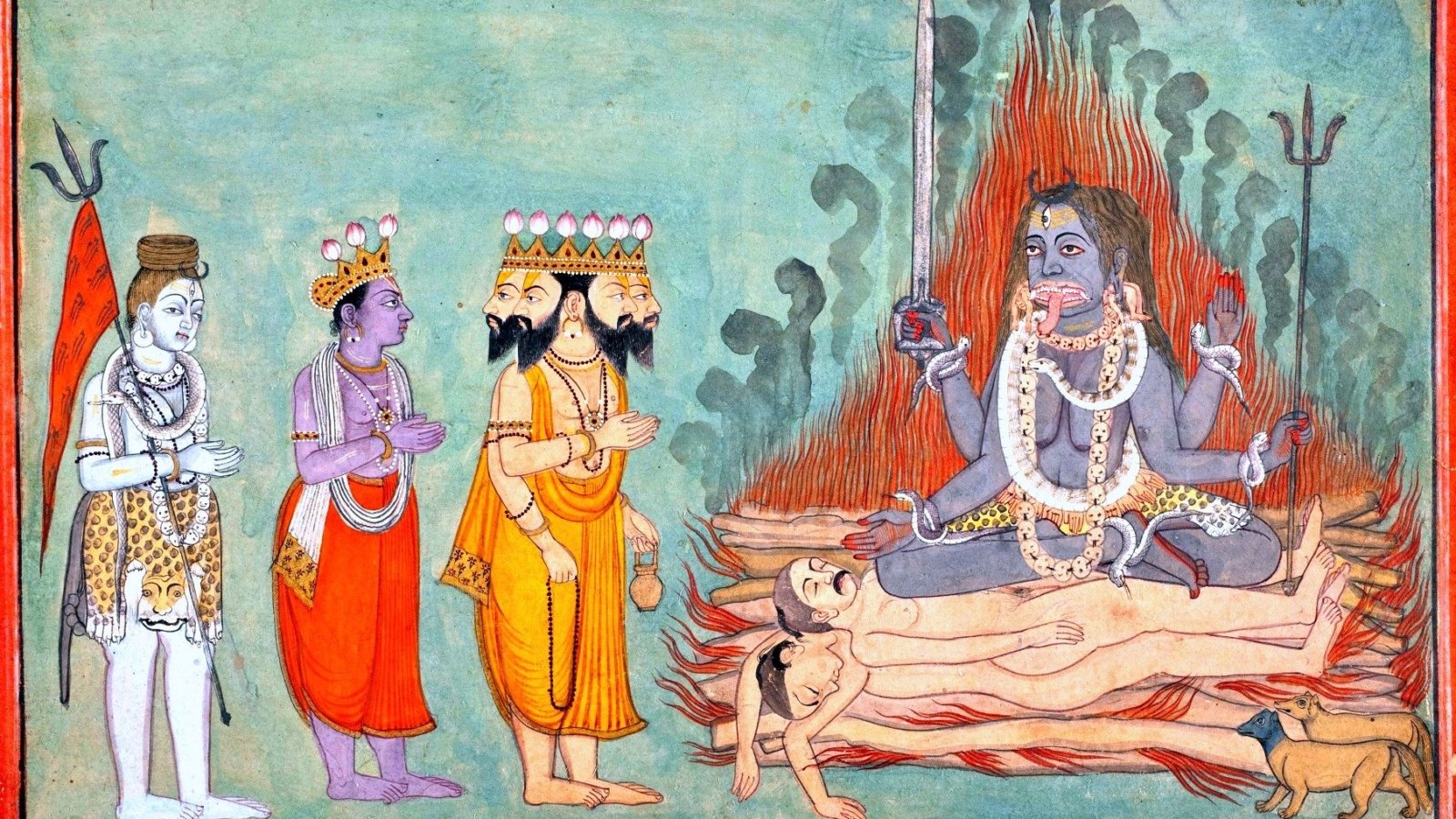 The story of the goddess Kali is told in the Devi Mahatmya of the Markandeya Purana. She is an incarnation of the goddess Durga. For those who don’t know, Durga was created from the combined powers of Brahma, Vishnu, and Shiva in order to defeat the demon Mahishasura. But she is generally viewed be the consort of Shiva, because she is considered an incarnation of Shiva’s wife Parvati. (Or if you’re a follower of the Shakta sect, then you’d view Durga to be a manifestation of the same Adi Parashakti of which Shiva’s wives Shakti and Parvati were both incarnations.)

In any case, the story of Kali happened after Durga’s victory over Mahishasura. Once the demons Shumba and Nishumba defeated the gods in battle and took over the three worlds, so the gods went to mount Kailash to ask Durga for help. After they said a prayer to Durga, Shiva’s wife Parvati came by, and out of her body came a form of Durga known as Ambika or Kaushiki. During Ambika’s battle with the Shumba and Nishumbha’s Asura army, she was confronted by a pair of Asura generals named Chanda and Munda. To defeat them, Ambika created Kali out of her forehead, as described in this chapter of the Devi Mahatmya of the Markandeya Purana:

Thereupon Ambika became terribly angry with those foes, and her anger her countenance then became dark as ink. Out from the surface of her forehead, fierce with frown, issued suddenly Kali of terrible countenance, armed with a sword and noose. Bearing the strange skull-topped staff, decorated with a garland of skulls, clad in a tiger’s skin, very appalling owing to her emaciated flesh, with gaping mouth, fearful with her tongue lolling out, having deep-sunk reddish eyes and filling the regions of the sky with her roars, and falling upon impetuously and slaughtering the great asuras in that army, she devoured those hosts of the foes of the devas.
Kali defeated Chanda and Munda and brought Ambika their heads, for which she is known as Chamunda or Chamundeshwari. And she was instrumental in helping Ambika defeat Shumbha and Nishumbha and restore rule of the three worlds to Indra and the gods.

Mother Kali is the consort of Lord Shiva. Lord Shiva is the silent aspect of the Transcendental Reality, and Mother Kali is the dynamic aspect of the Transcendental Reality. Truth is complete when it is both dynamic and silent. Truth is complete when the dynamic aspect and the silent aspect function together.

The current times we live in as per Sanatan dharma:-
The Brahma Vaivarta Purana (related to Rathantara kalpa) mentions a ten thousand-year period, starting from the traditional dating of the Kali Yuga epoch, during which bhakti yogis will be present. Lord Krishna foretold that Kali Yuga will be full of extreme hardships for people with ideals and values.

In the Brahma-vaivarta Purana has words spoken by Lord Krishna to Mother Ganga just before the beginning of Kali yuga (the age of quarrel and strife). Kali yuga began approximately five thousand years ago, and it has a duration of 432,000 years, leaving us with 427,000 years till the end of the present age. Within this 432,000 year period, there is a period of 10,000 years that will be a golden age. That golden age is being described below by Lord Sri Krishna. Predicted in Brahma-vaivarta Purana 4.129. The fourth part of the Brahma-vaivarta is called Kṛṣṇa-janma-khanda. Chapter 129 is called Golokarohanam, because it describes how Krishna returns to His abode. This specific dialogue is between Lord Krishna and Mother Ganga. Verse 49 is a question by Ganga, verses 50–60 are Lord Sri Krishna’s answer.[citation needed]

This text is taken from the Brahma-vaivarta Purana

kalau dasa-sahasrAni
haris tiSThati medinI
devAnAM pratimA pUjyA
sAstrANi ca purANakam
“(Sri Krisna said:) Lord Hari will stay on this earth for the first ten-thousand years of Kali-yuga. Till then gods will be worshipped and the Puranas and scriptures will also be present.”

The great Vaishnava Saint Chaitanya Mahaprabhu exhorted, “Krishna Nama Sankirtan” i.e. the constant chanting of the Lord’s name is the supreme healer in this age. It destroys sins and purifies the hearts through Bhakti ensures universal peace.